The Kubotan (also known as the ‘pocket stick‘), which may appear to those who are not familiar with it to be a standard key ring or key chain.

This self defense weapon is about the same size as a standard permanent marker and features 6 round grooves on the body to allow for a firm grip and an attachment at the end where keys or other items can be attached.

Although to the untrained eye the Kubotan looks harmless it is in fact an extremely effective self defense weapon – and may be classed as such by government regulators in some countries.

The use of the Kubotan is either as a hammer like attack weapon or as a rigid stabbing tool. It is primarily used on soft, bony or other sensitive parts of the body. 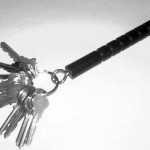 Training in the use of the Kubotan emphasizes attacks on such body parts as the:

However, all sensitive parts of the body can be attacked with great effect in self defense situations.

An added bonus is that when a large number of keys are attached to the one end they act as a flail and can be used to great effect on the face, especially around the eyes.

When used as a weapon to compliment other martial art approaches or submission holds the Kubotan can be especially effective.

For instance should an assailant be grabbed around the neck the Kubotan can be used the immobilize the attacker when pressed into the lower part of back or spine.

The effectiveness of the Kubotan in rendering attackers compliant is the use of the tool by law enforcement officers across the world. The portability and multi function use, as well as its reputation as a non lethal weapon used in subduing suspects is part of its attraction to law enforcement agencies.

Although there are a number of different variants of the Kubotan, including those with other self defense components such as the ability to use pepper spray the original, without the sharpened or tapered end is widely recognized as being the only genuine variant.

Those skilled in the use of the Kubotan can also make use of substitutes such as ordinary household items (including pens and other objects), making training in the use of the Kob0tan one of the most versatile types of self defense available to the man (or woman) in the street.

The effective use of the Kubotan self defense keyring, relies more on a specialized knowledge of its potential and the vulnerable parts of the human body than training in other self defense weapons might require.

This has made this piece of equipment incredibly popular.

1 thought on “The Advantages Of The Kubotan Self Defense Keyring”