If you trek into the wilderness where the need to survive a bear attack is a required skill, then the video below will have some very good information for you…

In the above video on How To Survive A Bear Attack, Outdoor Survival Expert Dale Collett offers up some advise on your best course of action if confronted with a bear or while traveling in bear country. Here are several points Dale points out about the nature of bears. 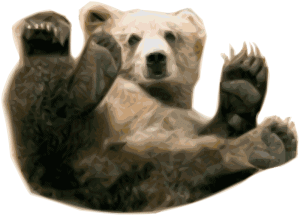 Much of the time this will cause bears to disappear before you ever have contact with them, but if you happen to stumble upon a;

Grizzly bears can attack for no reason, they are quite vicious. Black bears on the other hand are slightly less aggressive. I wise not to trust either of them.

If you are confronted by any one of these bears,

Running will only cause the bear to view you as prey and cause it to chase you down. Bears can get up to speeds of 25 to 35 miles an hour very fast, quicker than we humans can. Don’t forget that bears can climb, basically they can go anywhere you can.

Most of the time a bear will simply ignore you and turn or walk away, wanting nothing to do with you. This doesn’t always work, so If the bear does charge you, Stand your ground. Charges from a bear are a bluff. They can be as scared of us as we are of them. They may even charge at you a few times. Just keep walking away, talking to the bear, keeping your eye contact off the bear and don’t run.

If the worst does happen and the bear attacks, keep the following things in mind:

He may bite you, he may scratch you and this is where the difference is between a black bear attack and surviving a grizzly bear attack differ. It is important to understand and know both species of bear when traveling where they call home.

Things to know about when surviving a Black bear attack:

The thing to know if you are to survive a grizzly bear attack, do none of the above other than to just continue playing dead and hope for the best.

A great thing you can do protect yourself from a bear attack is to carry bear spray with you. It’s a pepper spray made from capsicum. If you spray it at a bears face when the bear is really close, it can deter its attack.

Another tactic you can take when surviving bear attacks is to climb a tree. Yes, Bears can climb trees but they are more reluctant to do so. Not just any tree will do it must be a very sturdy tree, at least 15 inches in diameter. Smaller trees can be pushed over by the bear, They have even been known to chew through them to get at you.

Let’s go over the points of how to survive a bear attack in the wild: