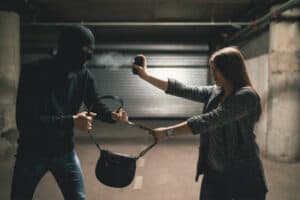 We often receive emails asking.. “What pepper spray should I buy?”

It is advisable for the average citizen to keep a personal self defense weapon ready for their personal protection. While some training is needed to ensure your self defense pepper spray is productive, it doesn’t need to be extensive.

When a visitors to the security defense weapons website ask us which pepper spray we recommended. The first response is simple,

“It’s the one that you will have available and ready to use.” Any of the sprays will be effective in defending you.”

Here is a personal recommendation…

Get a pepper spray with a combination of oleoresin capsicum pepper, CN tear gas and a UV dye.

Honestly many so called self defense experts have expressed that they feel a triple action self defense sprays are a waste of money or that they try to do to much. I disagree and this is why..

“One of my female students encountered an armed robber and even with her extensive training, it almost cost her life. She was walking home when a man, who appeared to be high on drugs, all of a sudden jumped out, obstructing her path. The street she was on happened to be dimly lit that night.

The attacker pulled out a knife, demanding her wallet and other personal belongings. She did what I often recommend be the first cause of defense and complied with her attacker. After all it is better to loose a few items than be injured over some stuff.

The crazy thing was that after she complied with him and much to her surprise, he lunged at at her with his knife. Luckily, her training kicked in and she parry his knife attack, counter struck and was able to get away to call the police.

The bad thing was she sustained a bad cut on her hand and the bad guy was never caught.”

The next time we meet for self defense training, she frantically told me of how she had survived this very traumatic situation and wanted to know what type of personal security weapon I recommended.

We discussed all the different lethal and non lethal options and she was leaning more toward a self defense spray.

I immediately recommend the Mace Triple action pepper spray as an ideal self defense device to carry with her. Pepper spray solved the concern she had with keeping her distance and her moral desire to not inflict serious harm on the perp.

I explained to her how the Mace triple action pepper spray uses OC Pepper combined with CN Tear gas and marked the bad guy with a UV dye. She also liked how it was capable of hitting a target at a range of about 10 feet. 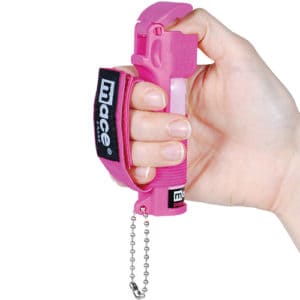 The Triple Action Pepper Sprays are available in many other types such as the;

Self Defense sprays cause a burning sensation when sprayed in face and eyes. They will often cause the eyes to slam shut. These effects are short lived. but it is long enough to give time to flee the danger and call for assistance.

Since pepper spray is considered a non lethal weapon, mostly due to It’s short term effects and the lack of any permanent injuries to the would be attacker. A triple action pepper spray that has OC pepper causes uncontrollable coughing and choking.

While, the CN tear gas causes profuse tearing, intense burning in the face and disorientation. The UV dye marks the attacker which helps with his identification and capture.

All these thing makes the Mace Triple Action Defense Spray
a great choice for your personal security needs.

1 thought on “What Pepper Spray Should I Buy?”