In order to answer the burning question, “what is oc pepper spray” and thus discover why OC sprays is the best chemical component, let’s first take a look at what chemical components have been used in self defense sprays over the years. 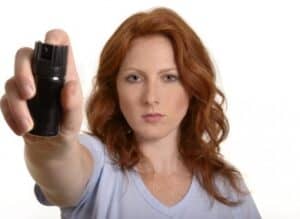 There are actually three main chemical compounds that have been and are used in pepper sprays.

CS and CN are irritants and irritate the membrane tissues, which causes a stinging pain and tearing of the eyes. The main down fall of both of these to components is the time it takes for them to work, between 5 to 30 seconds.

Even 5 seconds is a lifetime when it comes to facing an attacker with a weapon, like a knife. Since both CN and CS have been used in the military and law enforcement for many years. It has been proven that some people can resist the effects of these two self defense spray compounds.

For the many years that CN and CS were used by law enforcement officers they were riddled with accounts of total failure when these products were deployed.

These factors have all lead to the conclusion that these chemicals were far to unreliable for use by an untrained or possible physically limited individual. Thus not appropriate for personal self defense and security.

OC pepper spray on the other hand is not an irritant, but instead it is an inflammatory agent. When OC is sprayed in the face of a would be attacker two things happen instantly;

Unlike its counterparts, OC pepper works on those on drugs, drunk or psychotic

OC sprays works well on animals as well and there have been defense sprays designed as both:

Not only are CN and CS not as effective as OC, they take longer to wear off. The chemical residue of the first two can last for days. Also both are man made chemicals and have been identified as possible carcinogens. There is some documentation that suggests long term toxic reactions may occur.

OC on the other hand is a natural made chemical. Derived from different hot pepper plants, which is why it is often referred to as pepper spray. It has not been shown to have any toxic effects and wears off in 20 to 30 minutes.

Look at the reactions and take into account that they knew it was coming and had their eyes closed. An attacker would not have his eyes closed and most likely would not be prepared for the effects.

Here is a collection of different OC Pepper Sprays for Self Defense.

1 thought on “What is OC Pepper Spray?”