When considering the best pepper spray for self defense there are several items to consider. In the paragraphs below,, we will investigate several factors, thus revealing how when combined with the percentage of pepper the effectiveness of the pepper spray is more clearly determined.

In our recent article ‘Why is OC Pepper Spray the Best‘, I went into great details on the three different chemical types in pepper spray and what makes OC best for self defense. Discovering the best and safest chemical is at the heart of the quest for understanding the best self defense spray. 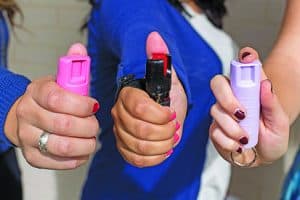 Understanding heat rating will give you a better grasp on what these percentages actually represent. So, what is Heat rating? Great question! The heat rating of OC pepper spray is derived from hot peppers and their heat is measured in SHU’s or Scoville Heat Units.

When you know the source of the heat in your pepper spray you have a guide to better understanding the heat generating capacity of the best self defense spray. Hot Peppers range from 5,000 SHU’s for Jalapenos, around 300,000 SHU’s for Habaneros and pure OC has an SHU of around 15 Million.

OC spray formulations can be processed from a hot pepper until they reach a heat rating of over 2,000,000 SHU’s. Yet, choosing the SHU rating and percentage of defense sprays does not give you the best indicator of potency.

The best pepper spray for self defense doesn’t have to be the one with the highest percentage. That can only be qualified by knowing what the percentage is based on. For example;

The OC carrier agent also helps when you consider the best pepper spray. The carrier agent holds OC pepper in the solution and assist in it’s dispersal as it releases from a pressurized container.

The actual carrier and OC formulation is a guarded by each manufacture and is most often for a solvent or an oil. Halon used to be in certain brands, but is now banned due to environmental concerns. Here are some common carrier agents;

HFC-134A is currently one of the best and safest carriers used. It holds the OC in the solution longer, helping break it down into the smallest possible micron-droplets when sprayed out of the best pepper spray container. In the examination of the hottest pepper spray an independent lab group discovered the real SHU of several leading brands.

Our 18% Wildfire pepper spray was on the top of that list.