The victim of a vicious dog attack that was caught on CCTV cameras wants irresponsible dog owners held accountable if they let their pets wander the streets off-leash.

“I was walking home from my parents’ house on Darlingsford Boulevard in Melton,” he said. “It was about 10pm … two dogs that looked like pit bulls came out from behind a car and started to attack Baxter. I was just screaming out for help. My first instinct was to hit the ground and cover Baxter.

“It was a frightening situation. After the fight, I was checking over him … he’d stopped breathing for about 15 to 20 seconds in shock and then he shook his body and started breathing again. I was beside myself.”

The two-minute ordeal was caught on the security cameras of nearby houses.

“Luckily, we’re both fine now,” Mr Tempany said. “He came away with four minor puncture wounds and bruises. I had grazes all up one side of my body because I was trying to cover him as much as I could.” 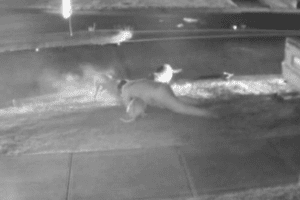 Mr Tempany got Baxter at six weeks old as a 30th birthday gift from his parents.

“I’m very hesitant to walk him in Melton again, but we have been on walks out at the beach and he’s OK,” he said. “He doesn’t seem to be spooked at all.”

He said the situation could have been worse if not for the residents who came to his aid.

“A woman came out with a plastic chair that another man used to help break up the dog fight and scare the other dogs off,” he said.

“I want to put forward my sincere thanks to around about a dozen people who came out to assist.

“I’ve seen some dog owners who just let their dogs run off.

“If you take your dogs out for a walk, as a responsible owner, you should be with them and always have them on a lead.”

Don’t walk your dog in fear of being attacked. Carry some dog pepper spray or an electronic dog repeller . Even if they affect your dog at least it can save you a trip to the ER.